Joined 27 d ago
·
4 Posts
Little backstory: I bought a used 2021 MT03 with 800 miles that was crashed, mostly cosmetic issues. The only functioning part that I replaced was the radiator. I installed new cheap aftermarket rear sets from amazon, ebay shorty levers, and other track bike goodies. I'm using this as a dedicated track bike.

My issue is that sometimes the bike doesn't want to downshift from 5th to 4th and even more uncommonly 4th to 3rd. Seems to happen when it's revved all the way out in that gear, and no I'm not trying to downshift to 4th while I'm at 12k RPMs in 5th lol.

So what usually happens when it won't downshift is I have to wait until I'm way lower in the RPM range, probably around 4k, give it a little throttle, and then it'll go into 4th. Same scenario but not as often going from 4th to 3rd.

Again, it happens pretty randomly and for some reason I notice this problem more often at the same part of the track than others...

My clutch and chain is adjusted correctly, I changed the oil when I serviced everything in March 2022.

Any ideas would be appreciated. Tried Googling but just found mostly newbie questions about shifting.

2016 Yamaha YZF-R3
Joined 12 mo ago
·
150 Posts
Right off the bat when you said you installed rearsets, my first question is did you install the shift nub (off the shaft coming out of the engine) in the correct orientation.

If something mechanical only happens seemingly randomly, it's usually not a mechanical failure, but a user error. When you install the shift nub, it needs to be installed at 90˚ to the axis of rotation, so that maximum force is correctly applied. When it's not at 90˚, the applied force is reduced (there's a equation for calculating it, can't recall it off the top of my head). Since riders aren't always applying the same force for every shift, due to shifting in different positions, laziness, or many other variables, this means that what seems like "random" is actually just the times when you simply didn't apply enough force, and because that nub isn't properly installed at the correct angle, it's not enough force for it to make a complete transition between gears. Ergo, the end result you mention, "So what usually happens when it won't downshift is I have to wait until I'm way lower in the RPM range, probably around 4k, give it a little throttle, and then it'll go into 4th. Same scenario but not as often going from 4th to 3rd."

You need to go back to your rearset install, and make sure you've done it correctly basically. The other thing you need to make sure of is that you have the correct clutch free play. Too much and you won't be disengaging the clutch all the way, which will again cause the same issue, or make it worse at least.
Y

Joined 27 d ago
·
4 Posts
The shift arm is straight up and down. Its upside down for GP shift. The shift rod is at an angle though, I guess I should try and adjust that so its more parallel with the ground.

As far as force goes, when it doesn't want to downshift I do try and lift harder on the shifter but it doesn't change gear until lower RPMs it feels like it's locking me out. My shifting is pretty consistent, I never have issues on my GSXR. 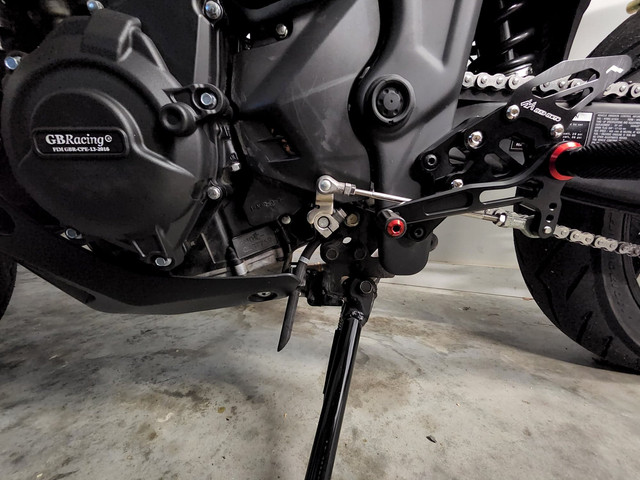 2016 Yamaha YZF-R3
Joined 12 mo ago
·
150 Posts
That's nothing, has to be something with the aftermarket products installed then. Might have a licensed mechanic check it out to make sure it's all set up right then.
B

I'll give that a shot, and I'll update this after my next track day. Thanks
1 - 8 of 8 Posts
Join the discussion
Continue with Facebook
Continue with Google
or sign up with email
About this Discussion
7 Replies
3 Participants
Last post:
Yahoo 17 d ago
Yamaha R3 Forums
A forum community dedicated to Yamaha R3 motorcycle owners and enthusiasts. Come join the discussion about reviews, racing, modifications, classifieds, troubleshooting, maintenance, and more!
Full Forum Listing
Explore Our Forums
Yamaha R3 General Discussion Introductions Exhaust & Fuel Delivery Yamaha R3 Parts For sale R3 Parts and Accessories
Recommended Communities