Joined 6 mo ago
·
352 Posts
We all ride for miles without an incident, gaining confidence that crashes are what happens to the "other guy"... then... this.

Jeans, street shoes, and a tee shirts would have produced a decidedly different result.
D

Although, no amount of gear will save Max (or one of his riding buddies). If they continue to ride as they do, one of them will die, it's just a matter of time. So far luck as been very much on their side. Harsh, but true.

Joined 7 mo ago
·
276 Posts
excessively speeding is also a factor.

Yes... but a slide at 25MPH for the width of a road into a curb or other obstruction, will grind through your jeans and expose flesh to the road surface, which will grind away to bone with ease.

An impact with an object or the ground at any speed from a height of 36", can result in severe injuries unless there is something to absorb and spread the load. My wife dropped a bicycle at under 5MPH, resulting in a broken wrist, gashed face, and abrasions that after 4 years, are still not 100%. She did have a helmet on, which was destroyed doing its job. Insurance covered most of it, but our bill was still more than what I paid for my R3. It kind of woke me up about how exposed we are when riding motorcycles, and that with just a little protection, we can significantly reduce the severity of injuries suffered. Road rash is not just ground away skin, but often bone underneath that cannot be replaced, and fractures that take a long time to heal properly. A bike falling on the side of your unprotected foot or ankle will crush just as easily in a parking lot, as it will at 20MPH or 100MPH.

I'm like most who have ridden thousands of miles with no real protection, and never gave it all much thought. I still struggle with the bother of putting on the gear at times. But, there are now so many more vehicles on the road, and so many more belligerent drivers among them. Couple this with the imagery portrayed of bikers being outlaws by media and movies (not to mention Harley Davidson marketing and black leather / bandana wearing, open pipe zealots), apathy, distractions of phones, stress and alcohol/drug use, growing road rage, lack of attention that makes motorcycles invisible, and the explosion in SUV and LTVs on the road driven by truly awful operators with no skills, etc... riding in 2022 without the minimum of protection (CE armour on knees, elbows, shoulders, hips, back, tailbone) abrasion resistant clothing, a current helmet, and proper crush-proof over-ankle footwear, is not risk management, it is risk exposure for no real reason.

Let us no forget that a motorcycle injury often involves multiple medical disciplines for treatment. That means insurance co-pays (assuming your insurance will even pay at all - which some do not), can add up to a massive bill, on top of extended physical therapy sessions, loss of income, and potential long term issues.

But, I smoked cigarettes for 30 years before waking up to what it was doing to me, so I quit. Like smoking, most don't care what others think, until they come to their own epiphany for their own personal reasons. Folks will continue bar hopping, riding in skirts, t-shirts, shorts, flip flops, jeans, etc.. until something occurs that changes their state of mind (like wearing deep scars for the rest of their life). The entire inane helmet debate still raging on is another example. After all these years, helmet use is still only at 69%, and that includes open face and half hat junk that is only marginally better than nothing:


It's a shame, like smoking, so many will be seriously injured or die before realizing they could have made better decisions.

Note that 2/3'd of motorcycle accidents resulting in serious injury occur within a few miles of home, on streets, not highways or high speed divided roads. While it's easy to point to the rooky racer half wits in the mountains, the reality is, most riders are wiped out in accidents at speeds under 40MPH, in intersections, where cage dwellers pull left hand turn maneuvers in front of them, pull out in the path of a motorcycle like the bike was not even there, or from animals either running at them, or darting in front of them.

I hate riding gear as much as anyone. It's less comfortable, heavy, a pain to put on some times, and often hot. But... I hate road rash, broken bones, disability, long term pain and recovery problems, ambulance rides, having my cloths cut off by paramedics, and spending thousands on unnecessary doctor bills even more... so I suffer now, to avoid suffering more later. 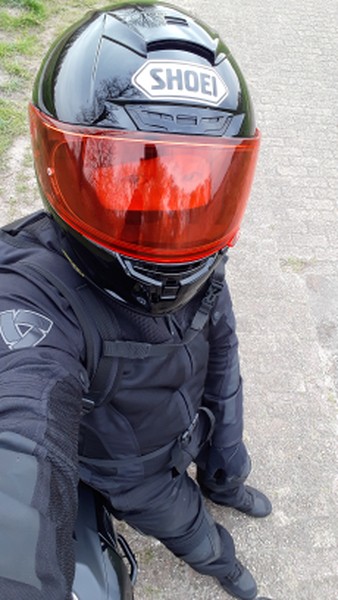 This is me ATGATT.

I learned the hard way by leaving the sleeve zips of a summer motorcycle jacket open during a hot day. ATGATT and closed zippers or no ride......

Here is a sample:

enshiu said:
This is me ATGATT.

I learned the hard way by leaving the sleeve zips of a summer motorcycle jacket open during a hot day. ATGATT and closed zippers or no ride......
Click to expand...

It's unfortunate that testing of the gear is so incomplete. They test the fabric, and they have specs for the padding, but there is no standard for construction and fit. Great riding pants are not so great if they are pulled off from poor fit. Zippered vents that are filled with weak mesh fabric are not considered at all, so if they tear open and rip the jacket or pants open as a result, too bad. Or, in your case cause harm when used as intended. If the seams are "triple stitched" with garbage cotton thread, and separate under load... oh well. If the abrasion resistant plastic based fabric gets a AAA rating, but melts to your skin, that's your burden. Pants with single layers on the butt, or armour that is not secured, or riders not wearing appropriate base layers to prevent skin shear (MotoGP riders wear silk base layers so the suit slips, rather than grabbing skin and tearing it apart), are all not addressed in any form.

Try to find a jacket and pants with matching zippers in the back to connect them. Heck, even from the same manufacturer, they are rarely matched, so that function is lost.

All the gear is a step forward, and being informed when buying is part of that. But.. this industry and its standards bearers really need to pull their head out and deploy meaningful information and standards, and stop being cowed by liability lawyers.

Joined 8 mo ago
·
13 Posts
What I'd like to know is how that guy didn't see that pretty big rock that launched the bike into a crash. It seems the guys ahead of him missed it.

martone said:
What I'd like to know is how that guy didn't see that pretty big rock that launched the bike into a crash. It seems the guys ahead of him missed it.
Click to expand...

It fell from the hill side between the riders. I have been on those Cali roads. Rocks tumbling off the hills onto the road surface are common. I had the front of my BMW Mcoupe mangled when one appeared from nowhere then bounced perfectly through the lower grill opening.

Joined 7 mo ago
·
276 Posts
atgatt all the way. road surface is no joke when sliding

Joined 7 mo ago
·
276 Posts
Nope it was my driving school bike when I had the left corner lowside.
It has crash protection even on the steering bar so no damage.